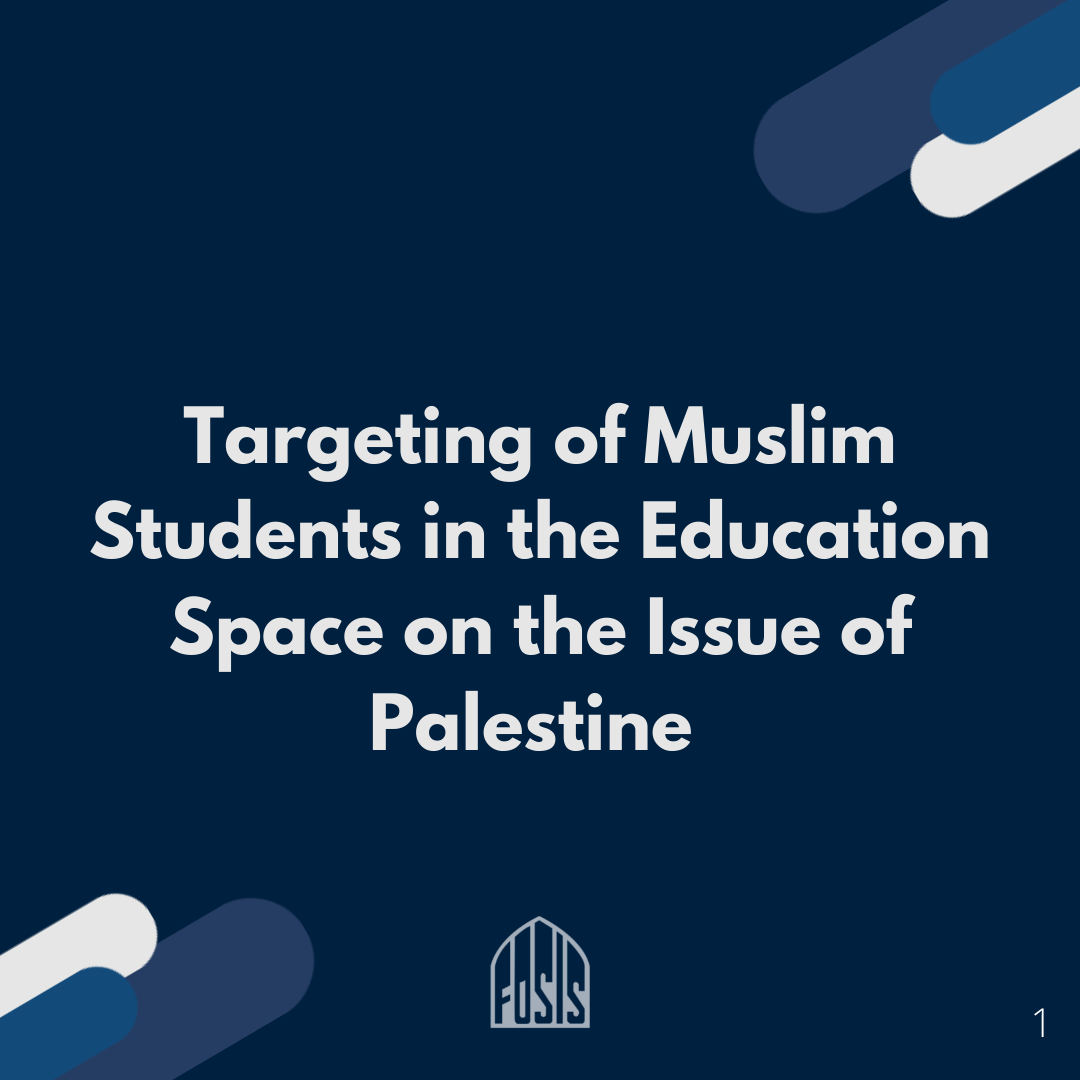 Across the country, we have seen immense support for Palestinian liberation and condemnation of the Israeli government’s ongoing project of illegal occupation and ethnic cleansing. Unfortunately, we have also received reports from Muslim students across Further Education (FE) & Higher Education (HE) who are facing censorship and sanctions for their condemnation of the recent violence by Israel. In addition, Muslim students in HE have been striving to hold their institutions accountable for their complicity in sustaining the injustice facing Palestinians.

We have increasingly seen attempts to repress vocal support and political organising of our Islamic Societies, Muslim Sabbatical Officers and the wider Muslim student community on the issue of Palestinian liberation. We have had reports of bullying, harassment, and the imposition of punitive measures being carried out on Muslim students who are seen to be pro-Palestine. The active targeting of Muslim students using Islamophobic tropes reflects an endemic and systematic bigotry and prejudice that spans the entire educational journey of Muslim students. Hence, the vast number of reports emerging across various educational spaces is a grave cause of concern for FOSIS.

Across the wider Muslim student community, from Islamic Societies at universities, to Muslim students within FE and HE as well as Muslim Sabbatical Officers at students’ unions, we have seen immense activity and momentum on standing up for Al-Aqsa Mosque and the Palestinian people. This has been in the form of highlighting the significance of this issue, expressing support for the oppressed Palestinians and engaging with the discourse of the recent violence at the hands of the Israeli armed forces.

As Muslims, we have a duty to speak up against injustice, express our religious sentiments on Al-Aqsa Mosque and show solidarity with our brothers and sisters facing oppression. However, there are unique barriers that disproportionately affect the ability of Muslim students to express their solidarity and engage on the issue of Palestine. Solidarity, support and activism from Muslim students is increasingly positioned in close proximity to “extremism” as has been recently reported in schools across the country. It has come to light that within certain education institutions and students’ unions, students are being questioned and/or sanctioned for their views and actions and in particular cases are being referred to Prevent, which quells the expression, practice and identity of Muslim students.

Within the education sphere, Muslim students describe a culture of fear at engaging in this discourse. Those active within this domain report mounting pressure from within their institutions and external organisations to dilute their expressions of solidarity and present a “two-sides” account which erases both the context and the power imbalance between the Palestinian people and the apartheid state of Israel.

Zionist narratives, such as the conflation of anti-zionism with anti-Semitism have been weaponised to effectively silence Muslim students, their views and their activism which discourages their vocal defence of the Al-Aqsa Mosque and the persecuted Palestinian people. This is an example of attempts to obscure the crimes committed by the Israeli state, and to criminalise initiatives like Israeli Apartheid Week and the Boycott, Divesment and Sanctions (BDS) movement which directly address these crimes.

As FOSIS, we urge educational institutions and students’ unions to do more to support and protect their Muslim students, Islamic Societies and Muslim Sabbatical Officers from targeted pressure that compromises their religious expression, welfare and their ability to raise awareness of human rights abuses committed by the Israeli state.

FOSIS remains committed to fighting all forms of Islamophobia and discrimination faced by Muslim students. We are working with other expert organisations in the field to provide students support under the current circumstances. If you are a current student in Higher or Further Education or a Sabbatical Officer and have any concerns, please do contact us at: [email protected]