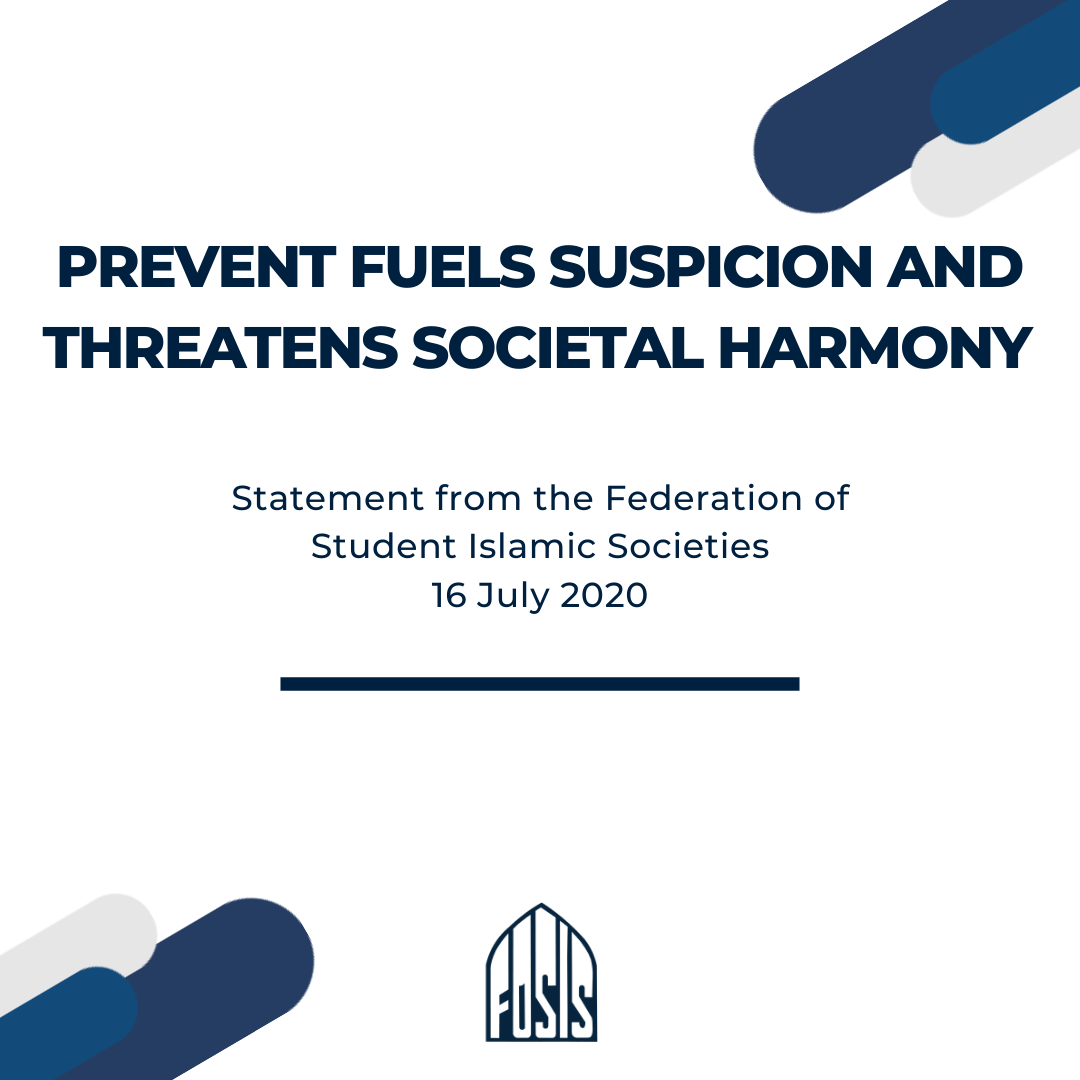 Statement from the Federation of Student Islamic Societies

We at FOSIS have been vocal in raising our concerns regarding Prevent and the negative stereotypes it continues to perpetuate against Muslims, time and again. The recent findings detailed in the report titled “Islam and Muslims on UK University Campuses: perceptions and challenges” only serve to further legitimise our concerns. The report, compiled by Professor Alison Scott-Bauman at SOAS University of London along with professionals from Lancaster, Durham and Coventry Universities, highlights that although there is harmony and “sincere interfaith initiatives” on UK campuses, there is an undeniable extensive societal prejudice against Muslims.

A key finding of the report is that Prevent reinforces negative stereotypes of Islam and Muslims while curbing freedom of speech and expression on univeristy campuses. Furthermore, the report highlights the presence of a firmly embedded Islamophobic belief that Muslims are somehow linked to terrorist activity. This demonstrates that a change in policy will be insufficient in tackling the entrenched prejudice against Muslims which is also fuelled by biased reporting and speech of the media and politicians. It is evident there is a need for a culture change within universities which fosters understanding, cohesion, trust and resultantly strengthens and diversifies campus life.

According to Dr Enam Ahmod, President of the Federation of Student Islamic Societies: “As evidenced by this recent report, Prevent has undoubtedly contributed towards the creation of a hostile climate rife with suspicion and fear and has played a central role in legitimising anti-Muslim rhetoric. The only thing that can be prevented by any policy that is fuelled by Islamophobia and cultivates fear, suspicion and prejudice is the harmony, mutual respect and tolerance which is essential for the well-functioning of any culturally and religiously diverse society.”

Muslims and other minorities have continued to bear the brunt of the Prevent agenda since its public introduction in 2006, which has undoubtedly fuelled the growing epidemic of Islamophobia and has led to the increased stigmatisation of Muslims in the UK. In 2015, Prevent was placed on a legal footing for schools and colleges, among other public bodies. This law is referred to as the Prevent Duty and stipulates public bodies have a statutory duty to report and monitor individuals who are believed to be ‘at risk’ of being drawn into terrorist activity.

It is nothing short of disingenuous to pretend that Prevent is not part of a wider manoeuver to increase surveillance and watch over Muslims. From increasing Prevent funding in areas densely populated by Muslims, Prevent has an undeniably strong history of monitoring and criminalising Muslims, leading to further marginalisation and ostracisation of this minority group. Furthermore, Prevent has been widely discredited with evidence showing it is completely ineffectual and disproportionately targets and scapegoats Muslims.

Implementation of the Prevent Duty on campuses has been divisive and unfairly targets and discriminates against Muslim students. From increased surveillance and regular monitoring of information technology to the implementation of stricter policies for external Muslim speakers; Prevent disproportionately affects Muslims. Various incidents, such as King’s College London barring ID card access to its students that had been identified as politically active, have brought to light the context of increased surveillance and security that policies like Prevent operate in. This is compounded in the case of Muslim students.

Universities have long been characterised as diverse communities that champion free speech, inclusivity and cultivate political empowerment and critical thinking. However in recent years, we have seen a drastic shift in this. Instead of functioning as hubs for activism, empowerment and personal growth, they have morphed into something that is perhaps best described as surveillance camps. Those with strong political views are no longer encouraged to articulate their views and are, conversely, labelled as a threat. Others are monitored and surveilled for having strong or even changing religious views. In this way Prevent stifles dissent, cultivates suspicion, criminalises perfectly normal activity and stunts personal growth. Worryingly, the latest official statistics show the most Prevent referrals were made in the education sector at 33% which is ironically higher than even the number of referrals made by the police.

We remain firmly opposed to Prevent due to its alienation of Muslims, the suspicion it has fuelled, and fundamentally how it has altered the nature of relationships between people, communities and institutions. We are urging our universities to continually challenge Prevent and strive towards the equal treatment and safeguarding of all students, irrespective of their background, political or religious views. We are also urging all the students we represent to remain vocal against all discriminatory policies that threaten societal harmony. Ultimately we are calling our government to completely scrap the Prevent policy. We firmly believe that any policy built on toxic foundations such as Islamophobia will only serve to corrode the harmony, mutual respect and tolerance of different faiths and beliefs which forms the very fabric of a culturally diverse Britain.

FOSIS’ Position on the APPG definition of Islamophobia