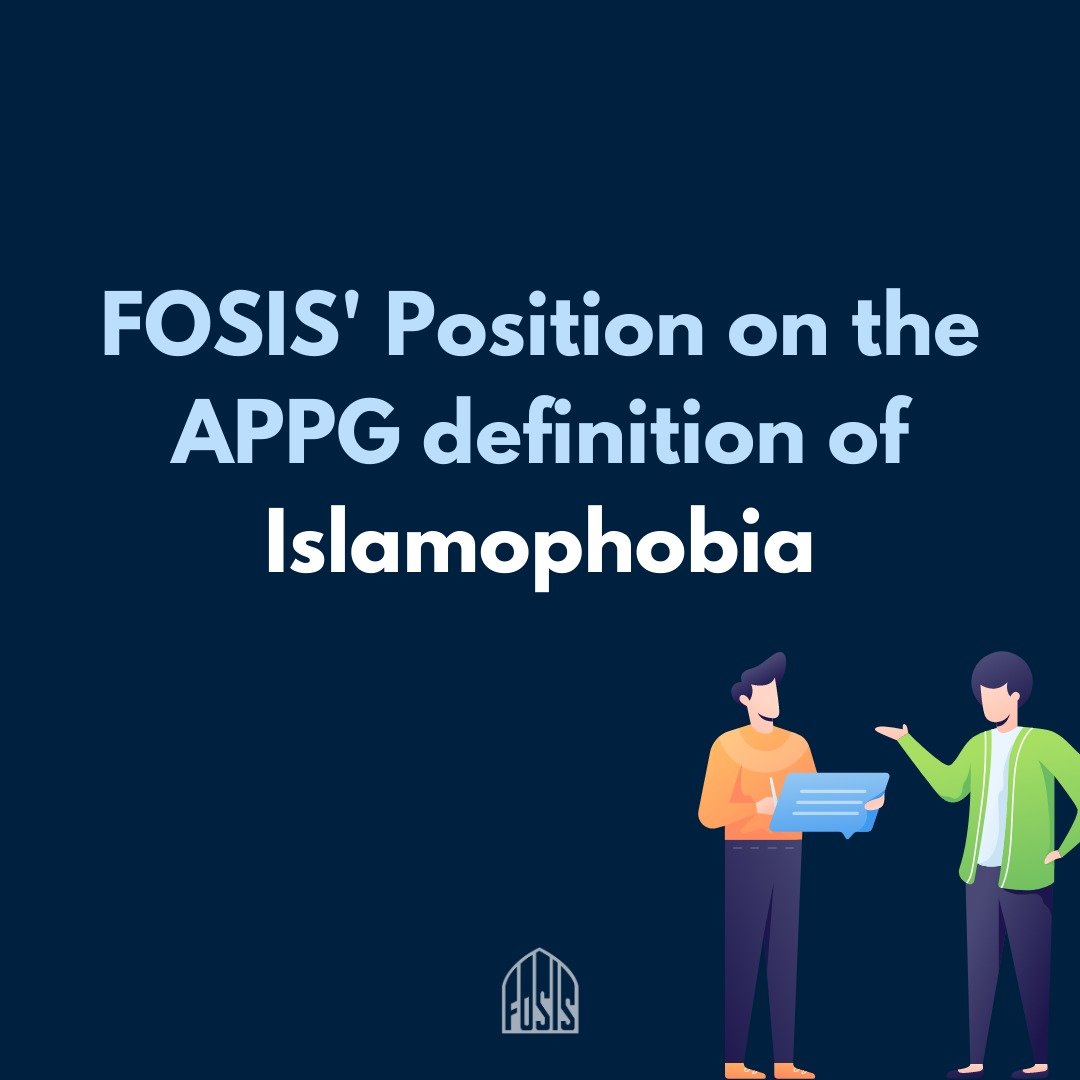 The All-Party Parliamentary Group (APPG) on British Muslims’ definition of Islamophobia states, “Islamophobia is rooted in racism and is a type of racism that targets expressions of Muslimness or perceived Muslimness.”

As the largest Muslim student representative body in the UK and Ireland, the issues Muslim students face are important to us, particularly the issue of Islamophobia. It is for this reason that we are concerned about the APPG’s definition of Islamophobia being advocated for in universities and Further Education (FE) institutions. We reject this definition on the grounds that it racialises Islam and Muslims. We firmly believe that the oppression that Muslim students are subjected to is one that targets and demonises them for their principles of faith. It is primarily religious discrimination that the Muslim student community face, not solely discrimination based on race.

We acknowledge that racism plays a part within the oppression that Muslim students encounter, however, describing our oppression as being primarily rooted in racism or being a type of racism is damaging as it takes away from the fact that:

A common theme in the discrimination that Muslim students face on campuses is that it specifically targets their religious beliefs and practices. According to FOSIS internal data, prayer rooms have been monitored or banned depriving Muslim students of the right to observe a fundamental pillar of their faith, religious texts have been removed from spaces designated for Muslim students’ worship, students have encountered hostility due to active observation of visible religious practices (e.g. the wearing of the hijab, praying on campus…etc.), and Islamic Society events have been policed and speakers have been unjustly banned from presenting at these events. These are some of many examples that demonstrate it is primarily our beliefs and practices for which we are targeted by individuals, institutions, and the state resulting in various types of societal exclusion and subjugation for us.

Here, it is important to highlight that when the APPG report was released in 2018, there was strong opposition to this definition citing that it would hinder counter-terrorism operations, limit freedom of speech, and because it was argued that Islamophobia does not need to be formally recognised within the law. We are aware that this statement may be used by organisations and activists who wish to derail the conversation on Islamophobia for reasons that are questionable at best. We would like to clarify that our criticism of the definition is not on these grounds and that we acknowledge the significance of formally articulating, within the law, the nuances, examples and manifestation of Islamophobia.

However, we strongly encourage Islamic Societies, universities and FE institutions to not adopt the APPG definition of Islamophobia. We believe the countering of Islamophobia through anti-racism is a process of secularisation and in our endeavour to eradicate Islamophobia, we should not seek to define or explain it completely through the lens of other forms of oppression such as racism. While it takes great courage to define our experience in our own words, for example, by using faith-infused language, it is an effort that is worthwhile in the longer term and in the shorter too.

For Islamic Societies and Student Unions, FOSIS offers an ‘Islamophobia Awareness Training’ that analyses these issues in more detail. This training is useful for anyone wishing to engage with this topic further. As a next step, FOSIS will be conducting a research project collating both qualitative and quantitative data through surveys, focus groups and consultations with Islamic Societies and Muslim students. This will facilitate the inclusion of the student’s voice on Islamophobia and feed into the larger work on coining an evidence-backed, sound definition of Islamophobia that accurately captures our experiences.

FOSIS stands in solidarity with the University of Bristol Islamic Society